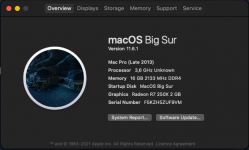 The GPU R7 240 is not natively supported by Big Sur, I followed the guide at here to fake id the GPU, but the original guide did not work for this GPU, I found another solution to change the ID of the GPU. The steps are similar to the mentioned guide on Opencore, I am going to explain what have been change to make it work.


In MacOS, by using the application Hackintool, I saw that my there are two devices that have the same ACPI path:

The differences are the suffixes: GFX0 and HDAU. I have tried to use the ACPI Path "\SB.PCI0.GPP8.GFX0" in SSDT but it also did not work.

I found another topic here. @rich4653 suggested to create an GFX0 using SSDT and change the device-id through DeviceProperties, I followed his approach and did two steps:

And it works, the device id has been changed and Mac OS Big Sur can recognise the GPU, but hardware acceleration does not work. 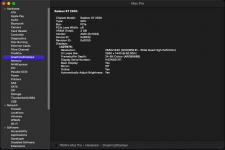