Hello guys!
Today I tried to install hackintosh Catalina 10.15 on my PC. I did all the steps on https://dortania.github.io/OpenCore-Install-Guide/prerequisites.html#prerequisites but in the boot process I have an error with the following message. "Please go to https://panic.apple.com to report this panic ". I've checked my config.plist with the Sanity checker at https://opencore.slowgeek.com/ I hope you have a fix for me because I wanna use macOS.

Please list your systems specs and attach an image of the kernel panic.
M 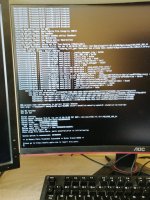 What kexts are you using?
M

@MartoBTW Seems ok there. Can you zip and upload your EFI folder.
M

I am having the same exact panic(CPU X Caller issue and cannot find a solution anywhere. I followed the same guide and I have also checked my config.plist with the sanity checker as well and everything seems to be in order, but I must be missing something. I have attached my EFI in a zip. Wondering if we have a common issue, or if I just missed something. Any help is appreciated!

Edit: my EFI folder is about 28MB where it says yours are both around 2MB so it won't let me upload. Could you tell me what the attempted fix was? I will have to figure out why one of my Intel kext is so large
Last edited: Mar 15, 2021

Why is your EFI folder so large?
what kexts do you have in there?

If you are using open canopy then delete all the audio from the audio folder in resources and if you using the openintelWiFi and Bluetooth kexts then remove them too and send over your EFI.
G

AudioGod said:
Why is your EFI folder so large?
what kexts do you have in there?

If you are using open canopy then delete all the audio from the audio folder in resources and if you using the openintelWiFi and Bluetooth kexts then remove them too and send over your EFI.
Click to expand...

I have attached the EFI minus IntelBluetoothFirmware.kext and Airportitlwm.kext. I also had nvmefix.kext at one point but read that could cause an issue so I removed the kext and removed it from the config.plist but the same panic remains.

Also, I realized I said it's an MSI board before, but its actually an ASRock B550AM Gaming. I've been looking for an older MacPro to upgrade, but I picked up a pre-built CyberpowerPC for $400 just 2 days ago and thought it would be a great fit! Couldn't believe the deal, I wouldn't be able to find this price even before the GPU and Silicon shortage! It's only 6 months old and been used for about half that time. The guy said his son bought it last year and then decided to build one himself.

@AudioGod any luck? I'm still struggling with this. I'm new to this site and also wondering if it notifies when someone comments on the thread after you because I never got notifications about your comment after I posted.

You must log in or register to reply here.